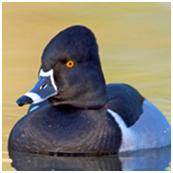 The National Wildlife Refuge System is a large network of public lands set aside specifically to benefit native wildlife. One of a lot of very nice things about ducks is that they respond well to management, and national wildlife refuge managers have learned all the best tricks to make it easy and rewarding to see waterfowl. There are over 550 National Wildlife Refuges throughout the United States which means that there is probably one near you. Here is a profile of four NWRs that provide exceptional views of waterfowl.

In November, Bosque fills up with Snow Geese, Ross’s Geese, and Sandhill Cranes. If you can make it, the Sandhill Crane Festival is a great opportunity to learn more about these fascinating birds, but it’s also a great excuse to get out there and see astonishing numbers of geese and ducks. Don’t pass up the chance to catch rarities either—Aplomado Falcons have been known to visit the refuge.

As you scope out herons, egrets, Ospreys, and more waterfowl than your eyes can take in, you’ll also be looking at Atlantic City in the background. Edwin B. Forsythe National Wildlife Refuge, or “Brigantine”, as the locals calls it, is a gem of New Jersey. An auto-loop circles the best waterfowl viewing spots—all you have to do is sit back and enjoy the view.

Just south of San Francisco, this refuge is a paradise for birds (and birders too). Millions of waterfowl flying along to Pacific Flyway stop and refuel, joining a plethora of terns, gulls, rails and shorebirds. Don’t forget your spotting scope.

Horicon Marsh is home to the largest cattail marsh in the United States. Just an hour away from the Wisconsin state capital, this beautiful marsh boasts sky-high numbers of Red Heads, Canvasbacks, American Coots, and other waterbirds. If you keep your eyes sharp you may spot a Whooping Crane.

National Wildlife Refuges were created partly to boost waterfowl numbers for hunting. Now they have become a treasure of biodiversity for birders who wish to bag waterfowl not with a gun, but with a pair of binoculars. Whichever refuge you visit you are sure to be rewarded with some good sightings.