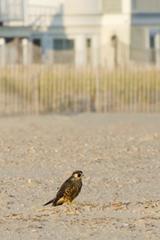 Why do Peregrine falcons sitting on the beach seem so unnatural to me? Seeing them soaring over the city or swooping over flocks of shorebirds on migration is how I think of them. Their drives into flocks of shorebirds create changing elliptical masses of birds intent on confusing their attacker. The shapes the shorebird flocks assume in flight fleeing from these fast moving birds is stunning — from the dark side view of the flock which quickly morphs into a flash of silvery feathers and wings all beating in harmony with one another, and making swift changes of height and direction. Although it seems like it would be difficult to outfly a predator such as the Peregrine, this rapidly moving mass of tiny birds often is a very effective means of escape. And when I see this hunting technique, the Peregrine looks like a large, dark form low in the sky, chasing, maneuvering around that flock and running them down with great speed and agility.

A few mornings ago, I walked the same shoreline I always walk, and there seemed to have been a small log that had washed pretty far ashore. It wasn’t there the day before and I presumed it was at a slight angle because it had become stuck in the wet sand as the tide moved out. I went closer to investigate, and what I thought was a log…was a Peregrine falcon, just resting on the beach. The shorebirds seemed unaware of his presence – still plying the sand at the water’s edge for food. Perhaps he had just been successful in a hunt and they knew there was no danger? But there he was, on the sand, just over the small dunes from a couple of houses, sitting quietly.

It’s migration time for hawks now and it seems every day I see them flying over the beach. Never too high – just high enough to scare up whomever is at the shoreline, hoping the odds are in their favor for a meal that particular time. And then occasionally, they take a short time resting on the beach — looking out of place and more like a log than the fastest bird in the sky.