Another 1000 African Gray parrots were discovered earlier this month in crates about to leave the airport in Cameroon for transport to Bahrain and the Middle East. This is 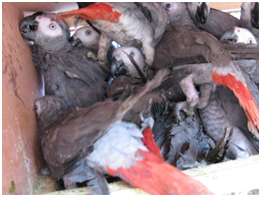 the second illegal shipment of these parrots intercepted in two months in Cameroon. The total number of birds discovered numbers over 1500 between the shipments – all sent to Limbe Wildlife Refuge for rehabilitation. The birds who are alive and who are able to be released will be. Many have already died from being crushed or glued or just general rough handling and fear during the “shipment.”

These are all wild caught birds of the endangered species variety. They are CITES II which means trade in them is restricted because their populations in the wild are so low that they cannot sustain any trade. I spoke with Dr. Irene Pepperberg of The Alex Foundation who has done the seminal work on the intelligence of African Grey Parrots. She told me that when there is this high a number of birds being poached, it means 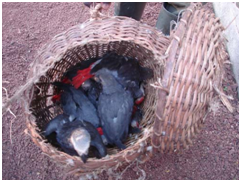 there are a number of large flocks from which the adults are taken. Stripped of their teaching population, the younger birds remaining in these substantially decreased flocks are left trying to learn to survive in the wild on their own and it makes these diminished flocks extremely vulnerable. If any of the birds that eventually are released are young, they have an equally challenging situation in that they also need adult birds who will teach them how to survive. But in this case it’s even trickier because these unrelated birds being released will need to know to search out and find adults who are willing to teach them. Add to this the fact that, according to research done by Dr. Pepperberg over a 30 year project, African Grey parrots have an emotional equivalent of a 2-3 human child and the intelligence of a 5-6 year old human child, and seeing these birds tightly crammed in baskets and crates is even more heartbreaking.

Limbe is charged with caring for over 1000 parrots right now – a financial and time burden they never expected. The best way to stop these kinds of killing shipments is to end the market for wild caught birds. It can start with each of us. Triple check your desire for an exotic bird before buying one. Make sure you are prepared for the commitment. It can be up to 80 years of commitment and you can expect your life to change dramatically to accommodate the bird – you cannot reasonably expect the bird to accommodate your lifestyle and still have any kind of satisfying life for either of you. If you still must get one, then be absolutely certain the bird was domestically bred and raised and there are several generations of domestically bred and raised birds in his or her lineage. Wild birds make terrible pets anyway. Those domestically bred and hand raised are more accustomed to human interaction and there is generally less aggression than with a wild caught bird. We can avoid unwittingly aiding and abetting the poaching of exotic birds by shrinking the market for them. The birds are much happier when they remain in the wild. And, it would be a travesty for a regal bird like the African Grey to disappear because of his ornamental value in the pet trade.