Today I got a Facebook request to sign a petition to stop the Japanese dolphin slaughter. I signed it and put a post on my Facebook page explaining a little about the situation and asking others to sign the petition. So now what? Will this slaughter ever really end? My understanding is that in the middle of the 20th century (not a terribly long time ago), there were three coves in which a handful of Japanese fishermen drove terrified dolphins into with the intention of bludgeoning the adults to death for their meat and then taking the babies still in shock, alive as aquarium specimens. All went along fairly well (for the fishermen at least) for a very long time as there was absolutely no knowledge of this happening outside the little towns in which they took place. But, eventually the word started leaking out and a few 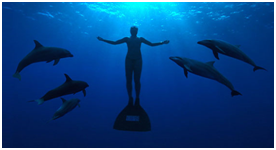 impassioned people (including Hardy Jones) tried to stop it. They were unsuccessful as the Japanese government just turned a blind eye – eventually shutting down 2 coves, but tacitly permitting it all to take place for a couple dozen fishermen in Taiji, while denying it ever happened at the same time. Sadly, the images are so horrific of what takes place that most people don’t even want to know about it. It almost boggles the imagination that this kind of brutality can take place anywhere – much less against an animal whose intellectual and emotional capacities are considered to be extremely high. As a result, any groundswell to challenge this has been very slow to get started. Now that Earth Island Institute has gotten involved with long-time dolphin defender Ric O’Barry and a film called The Cove has been released about this slaughter, there is a glimmer of hope that there may be an end to it all. Will the petition help? Who knows. But maybe it’s the start of something that will finally bring to public attention and end one of the more chilling condoned animal brutality cases in contemporary times.