There’s a lot of stress in my garden. This is not a good sign for a garden, but it’s the birds who are causing it. It took me awhile to figure out what was happening, but after listening to a day’s worth of anxious chirping by a female cardinal, I looked to see if there was a cat someone had let out 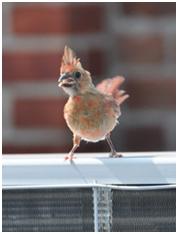 or a pesky squirrel. No predators in sight. Soon I started hearing another sound. It was unfamiliar to me but definitely a bird – probably a baby of some kind. It seemed a little late to have baby birds in the garden, but I was willing to go along with it. After further investigation I discovered that the female Cardinal seemed very territorial and she did indeed have a baby – one who was just getting his red feathers in and looking pretty blotchy at that.

For our Cardinal the issue seems to be that there is a Mockingbird family in the garden as well, and she is not very happy about this. The male Cardinal does not seem to be terribly concerned, but the female is beside herself most of the day and exhausts most everyone who listens to her.

The Mockingbird parents are looking a little bedraggled themselves right now as they have a youngster who is food begging constantly and wearing them pretty thin – and who accounts for the other peeping sound.

The anxiety continues, although it seems rather one-sided as the Mockingbird seems to care very little about the Cardinal who is pretty upset about their proximity. Mother Cardinal seems to want a little more space for her and her baby to be together and that is not going to happen this late in the season with two young birds around. The Mockingbird, who showed his true colors as protector of the garden (you can check him out in fighting form a few blogs back as he attacked a Kestrel in Raptors on the Roof) seems unfazed by the Cardinal’s angst and spends his days feeding his voracious baby.

And the baby Cardinal…well…despite it all, he’s just a happy little thing! 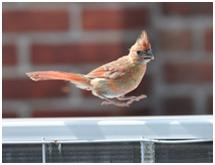 Get Cardinal and Mockingbird ringtones for your phone or iPhone at Wildtones.com.