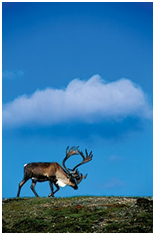 To most people, Caribou may not be the sexiest of animals, and in fact, there are probably not many people who think much about Caribou at all. But since they live in fairly undisturbed areas, it came as a bit of a surprise to hear that their numbers have declined 60% in 30 years. The Christian Science Monitor has an interesting story about this issue which was discovered by scientists at the University of Alberta, Edmonton. It is a cause for concern as these are animals who have been considered irrevocably numerous and do not cross many paths with humans. Sadly, this sounds like other wildlife populations we also thought were too numerous to impact – passenger pigeons, buffalo, horseshoe crabs, bats. There seems to be a human blindness to the possibility of human impact when there are so many of a species it seems overwhelming to us. But, this latest discovery about Caribou is surprising if only because these are animals most of us would think are too far off the grid to be affected. It seems living off the grid is no protection no matter how many of you there are.