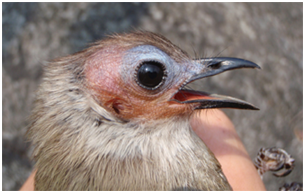 about these songbirds is that they are bald – an unusual trait in songbirds. It is a gentle reminder that we don’t really know everybody with which we share our world. And, we are made richer by the knowledge of even just one more gorgeous addition to our knowledge base. Read more about this discovery in Birder’s World and also check out the link they discovered (discovery seems to be the name of the game this week) of some great images taken by Stijn de Win in December 2008 – just around the time this discovery was made by Woxvold and Duckworth.

wrote a book entitled “The Ghost with Trembling Wings: Science, Wishful Thinking, and the Search for Lost Species” in which he looks at species that have been thought to be extinct but appear at a given point. He suggests that perhaps having hope and never giving up on an endangered species being still in existence is an important part of the rediscovery of a supposedly lost species. It really does give rise to the question of what is out there we don’t know about? Quite possibly a great deal. And, this little songbird is a testament for continued hope for more discoveries.