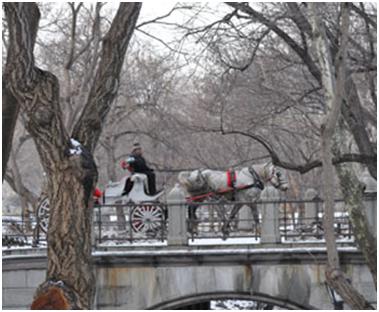 Well, in a word…No. It really isn’t. I live in New York City and regularly see tourists loading into carriages along Central Park for a ride, horses trotting through theater traffic on Broadway’s Times Square. Most tourists never think about these horses working long hours in extreme temperatures, often having collisions with faster, motorized vehicles; never having the chance to live any life outside of a cramped stall or ceaselessly standing or walking on a hard pavement. In New York City, a bill (Intro 658) was introduced in December 2007 by Councilmember Tony Avella intending to ban the use of horse-drawn carriages in the city. Despite seven accidents with horses in the past 18 months, this bill is just sitting there – opposed by the industry association and the Mayor. What’s going on? This one is a no brainer, and it is disappointing that our terrific mayor doesn’t see how simple it would be to bring a little humanity to a city for which he has done so much. The AWI has a good article on horse drawn carriage in NYC and recommends ways to help. Don’t just sit by while there is a great bill languishing which can help these horses. Write Mayor Bloomberg and let him know you support this bill…and that maybe NYC has enough great stuff going on even without the carriages. If you live in NYC, let our Mayor and Council Speaker Christine Quinn know you support the bill and write your local councilmember, too. BTW – City Councilman Daniel Grodnick plans on introducing a bill this summer which will bring nostalgic electric cars to the city ensuring driver jobs for every carriage driver. Let’s see… transportation that has the same nostalgia but is more environmentally friendly and more humane? Sounds like a great plan to this New Yorker.