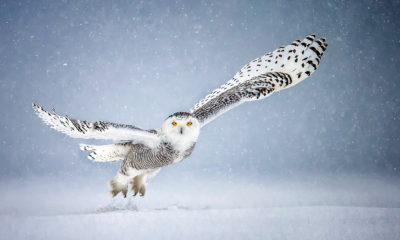 Owls, in general, are mysterious and beautiful birds, but no one owl species attracts quite as much fascination as Snowy Owls. Known for the male’s stunning pure white plumage, these gorgeous owls are normally found in the far north where they nest on the ground on treeless tundra. Despite their occasional appearance in the lower 48 states and their affinity for hunting around airports, these agile birds are still not very well understood. But this is beginning to change, as Project Snowstorm, led by author and naturalist Scott Weidensaul, has a research project now in its 8th season that has been tracking Snowy Owls by outfitting them with geolocators which gather tens of thousands of data points scientists can interpret to better understand their lives. These large showy owls sporting their high tech devices are providing deeper insights into their behavior.

Meet Redwood – a gorgeous pure white male who was tagged with a geolocator in February of 2020. Immediately upon being tagged, Redwood flew into the deep wilderness far from any location with a cell tower where the data could be downloaded….until December 17. Suddenly, Redwood’s entire life since the tagging – over 11,000 data points in nearly 11 months – was downloaded and provided a detailed map of his whereabouts. His behavior showed where he slept, hunted and when and where he was nesting – yes you can tell this info from a data download! In fact, the geolocators have onboard temperature sensors and accelerometers which help understand how these birds hunt, migrate and survive.
But there’s more! Just as we were finishing this newsletter, an update came in about Redwood who had managed to bite through part of his indestructible harness. Leave it to a Snowy Owl to do that! The harness had to be swapped out for Redwood’s safety, but there was an impending Covid lockdown so….well, check out the full story and updates on a number of the Project Snowstorm Owls.
Since the first Snowy was tagged in 2013, Project Snowstorm has tracked more than 90 Snowy Owls and has retrieved data on their whereabouts and lifestyles, bringing new insights into the lives and behaviors of these magnificent birds. This season they are tracking eight owls including Stella who is helping researchers understand the impacts a windfarm she overwinters near has on Snowy Owl movements.
Want to know more about Redwood’s life?  Here is what Scott and the rest of his team learned about this male once he flew past a download point. For more information on how Project Snowstorm tracks owls, check out their website.
Snowy Owl; Photo Credit: Stan Tekiela