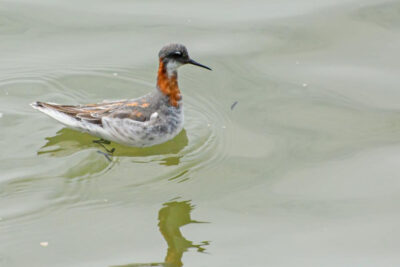 Some birds have really unusual, and in this case dizzying, behaviors. Phalaropes, which are shorebirds, are rarely seen as they spend much of their time on the water , nesting way far north in Alaska, or otherwise overwintering off the coasts of South America and Africa. But if you ever get the chance to watch a flock of them feeding, do not pass it up! Unlike other birds, phalaropes spin like wind up toys on the water. All the better to get food up to the surface! But there also seem to be some rules the birds have to adhere to. One is that this clever system of feeding doesn’t work when everybody isn’t spinning in the same direction. And while most birds are either right or left-footed…a few of these spinning shorebirds are ambidextrous.
Red-necked Phalarope; Photo Credit: Deborah Rivel