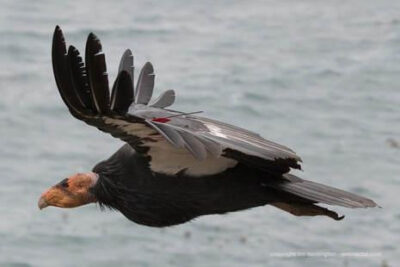 You may recall last year we wrote an article on the dramatic story of Redwood Queen, her long-time mate Kingpin and her chick Iniko whose lives were devastated by the Dolan Fires last August. Iniko’s nest tree was surrounded by flames, but he survived. His father, Kingpin did not. His mother, Redwood Queen, came back to find her chick alive, but he was attacked in his nest by a young interloping male. His mother fiercely came to his rescue, but there were consequences.
Released in 1999, the fierce Redwood Queen had a different name. At the time she was not terribly active and was known as Slope Slug. She was initially thought to be a male, and was at the bottom of the condor hierarchy. But the most dominant male, Kingpin discovered her and by mating with her, not only made it obvious she was female, but also brought her to the top of the condor hierarchy with him. She was renamed Redwood Queen, and laid her first egg in the hollow of a redwood – which was the first time this was documented for a California Condor.
But with the loss of her mate Kingpin in 2020, Redwood Queen had to decide how to remake her life. She found Phoenix- a condor who suffered the same trauma her chick Iniko did in a fire in 2008. They have mated and now are incubating an egg together. Life goes on and Redwood Queen’s story continues.
You can see her nest here. Learn more about California Condors from the Ventana Wildlife Society.
Image of California Condor Redwood Queen courtesy of Ventana Wildlife Society