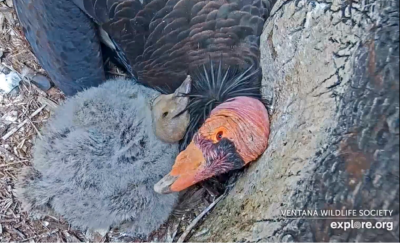 Iniko is the name of a 6 month old condor chick in Big Sur, California.  His name means “Born in Troubled Times”, and his story has been a dramatic one. Born April 25, 2020 to Condors “Kingpin” #167 and “Redwood Queen” #190, he was lovingly cared for by both parents who shared the duties of feeding and protecting Iniko since he hatched. Everything was going so well, then the fires started….
In August, when the Dolan fire began approaching Condor nesting sites, the Ventana Wildlife Society researchers who studied these birds held their breath. There wasn’t anything else they could do. It was too dangerous for them to rescue the young birds, so all they could do was wait. The next morning, when they were able to go into the area, they discovered Iniko alone in his nest cavity. He had weathered the fire – high in the safety of a Redwood tree. It’s believed Iniko’s nest tree has been around for about 1000 years, and this helped keep this young bird safe and sound while the fire raged below him.
There were a lot of condors missing after this fire burned through. Iniko’s mother Redwood Queen returned. His father, Kingpin is still missing, but Redwood Queen continued to feed and care for her chick, who was getting bigger and nearly ready to leave the nest. But on October 16, six year old condor Ninja #729 decided to move into Kingpin’s abandoned territory and attacked Iniko in his nest. Redwood Queen, once at the bottom of the flock hierarchy, is an amazing mother and fiercely protected her chick – attacking Ninja and forcing him out of the nest cavity. But during the battle, Iniko fell out with him. Iniko survived his early fledging, but even out of the nest, Ninja continued his harassment of the chick. Faithful Redwood Queen successfully protected Iniko and beat back Ninja’s territorial advance.
On October 19, researchers from Ventana Wildlife Society hiked out to check on him, and discovered Iniko had sustained a leg injury which required additional help. They were able to capture him and take him to the LA Zoo where the medical team could repair his leg. Iniko will stay there until he is 18 months old at which time he will be released and join the rest of the Condor flock in Big Sur.
Fires kill and massively disrupt wildlife. As of mid-October, 9 adult free-flying Condors are missing and 2 of 5 chicks were killed in the fire.
Check out this video of what was happening below Iniko’s nest during the fire, and what the scientists saw the next day – a happy Iniko, blissfully unaware of the fire raging below him.
This video is of Inikos early life and contains dramatic footage of Ninja’s attack and defeat by Redwood Queen, as well as Iniko’s rescue. 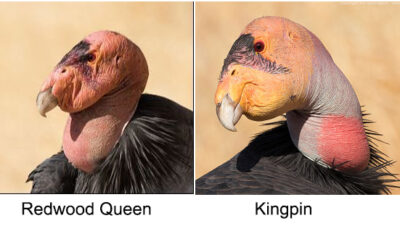