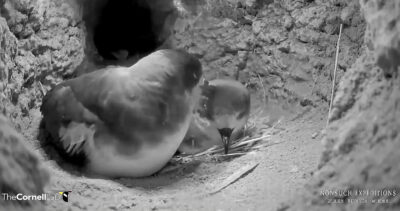 Even now, some birds are thinking about nesting. This affectionate Bermuda Petrel pair who has been using this same burrow since 2009 has returned again this year to start a family! But this is not your typical breeding pair of birds. These birds are critically endangered – in fact although once numerous, they were thought to have gone extinct in the 1600’s. But, 300 years later, in 1951, one bird was discovered which led to the Bermuda government taking over conservation efforts for the species. How does a bird like this become so endangered? And be completely unseen for 3 centuries? These are excellent questions! And if you are up for an uplifting and extraordinary story, and a little more info on some seriously unusual birds, you really should read on.
Petrels are pelagic birds – meaning they spend most of their lives sailing over the ocean, far from land. In fact, pelagic birds typically spend the first few years of their lives following food and the air currents of the oceans, never touching down. They eat, sleep and spend all their time in the air until they become mature. Only then do they return to land to find a mate and raise a family. Once the chick has fledged, they take off and do not return to land until the next year to breed again.
The places pelagic birds choose to nest in are often on islands. In the case of these Bermuda Petrels (also called Cahows), they do not nest anywhere else except the rocky islets off the coast of Bermuda. In 1500 this species was very numerous. But when English settlers arrived, in very little time, the pigs, rats, cats and dogs they brought with them completely decimated the birds on the islands where people lived, and it was believed the species had gone extinct.
Fast forward to the 20th century. In 1951 there was some curiosity if there was any hope that a few birds still remained on some outlying islets. Scientists mounted an expedition and discovered 18 pairs left, still breeding on tiny islets nearby where the main population was extirpated. But their nesting burrows were rapidly eroding away, so a captive breeding program was started with near-fledged birds brought to Nonsuch Island and introduced into man-made burrows to start a collective breeding colony. Now with a population up from 18 breeding pairs to 108, Bermuda Cahows are still one of the rarest seabirds. But they are not extinct! Read their entire story from the folks who are doing the conservation work in Bermuda.
If you want to watch this very affectionate pair mate, the best time to tune in is at night. During the day they are out of their burrow sailing over the open ocean looking for food. And yes, their interactions can be really heartwarming and give cause for hope.
Webcam and images courtesy of Cornell Lab of Ornithology