You may not be happy about your neighbor feeding cats that roam through your yard and attack the resident bird population. Often this starts out as just someone feeling sorry for a kitten they see that needs a meal. The next thing you know, there is a colony of a dozen or more cats hanging out in the neighborhood – often wreaking havoc, or even more frequently, finding themselves under the wheels of a car or dealing with some illness – life in the wild can be tough. But, how do these cats get there to begin with? Many of them are owned by the neighbor down the street who thinks Tabby needs to be free and opens the back door so he can have a happy life outside. Others are pets who have been abandoned when the family leaves town and leaves Kitty behind thinking she is a wild creature and able to fend for herself. Sadly, though, in North America there never were small wild cats and the family Tabby cat patrolling the neighborhood constitutes an introduced exotic (not a naturally occurring critter) and his daily strolls threaten the lives of the naturally occurring creatures who are not designed to defend themselves against cats. It is estimated that cats outside of the home in the US are responsible annually for the death of tens of millions of birds plus frogs, lizards and rodents.

Some compassionate people leave dishes of food out for these cats – often hopeful that they will stop eating the birds at their feeders. But feeding the cats really doesn’t make much difference in their hunting habits. The responsible feral cat carer will trap, neuter and release (TNR) all the cats that come to her home, including Tabby if he continues to hang out there. In this way, the hope is that through attrition, the colony size will dwindle. But most people don’t want to be bothered, and so the group of cats just continues to grow.

Many people call animal control to have the cats removed and euthanized. The pound has little choice as these cats are all pretty wild and they generally 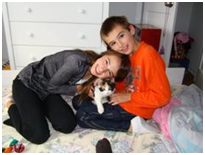 cannot even be approached much less adopted. But, some people see things a little differently. There is an amazing woman in northern New Jersey, Christine Margo, who runs K.I.S.S.(Kitties In Need of Someone Special). She knows that young kittens can be socialized and become great family pets, so she takes in feral kittens up to the age of 8 weeks and finds them good homes. How do I know this? Because she has helped me get a couple of feral kittens I knew about off the street. Knowing how much work it is to capture and get these kittens ready for adoption, I took care of getting 3 kittens trapped and neutered and given shots, (same for the parents who we were able to identify and trap) and then took the kittens to her 2 days later along with a donation for their care. Christine took care of the rest and got the kittens ready for their new lives. Less than 2 weeks later, one of them had already been adopted by a loving family with 2 kids. Jackpot! Both for family and kitty – in this case Calypso (pictured here with her new family).

Getting good adoptive homes for feral kittens is almost unheard of, but Christine and her organization K.I.S.S. are pretty unusual. Not only does she help give a decent life to a feral cat, she also helps the adoptive family get ready for their new arrival.

Ultimately, the solution to eliminating feral cat colonies is keeping pet cats indoors and taking them along as part of the family move. But until that day, there must be TNR and people like Christine to help. What Christine does is a near miracle and should be celebrated. Thank you, Christine!

If you live near K.I.S.S you can save a kitten who might otherwise be on the street by giving it a good home. Stop by some of their adoption weekends and see the adorable kittens available.

2 thoughts on “Angel in New Jersey”