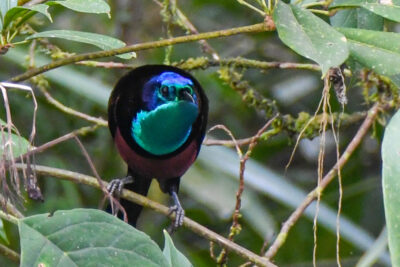 When we see birds like grackles or blackbirds, we say they’re black. Indeed, their feathers do appear to be black but if you take a look at them in a different light, they may be a brownish-black or the case of grackles for example, maybe an iridescent purple or blue. But recently, scientists discovered that there are some birds that produce feathers that reflect nearly no light whatsoever. In other words, their black feathers basically produce a visual void thereby making their bright mating feathers even more astonishing-looking.
These birds are found in Papua New Guinea and are birds of paradise – which are 39 species of some of the most extraordinarily beautifully outfitted birds on the planet. To achieve this dense black, these birds have feathers that don’t look like other bird feathers. Instead of being flat, with little barbs, there are tiny curls in the feathers’ barbs which create an innate ability to absorb nearly all light. Rivaling Vantablack which is a man-made material created from carbon tubes heated to 750 degrees, these clever birds of paradise are able to produce a quite similar visual void at their own body temperature.
And it appears these feathers create an incredibly perfect backdrop for some of their more brilliant iridescent feathers that are used during mating. It does appear the black feathers in the off-season when mating isn’t taking place, are actually normal black feathers!
Read more in Smithsonian, and this article in the Atlantic has some pretty spectacular images and more information on this highly unusual ability to produce the blackest of black feathers.