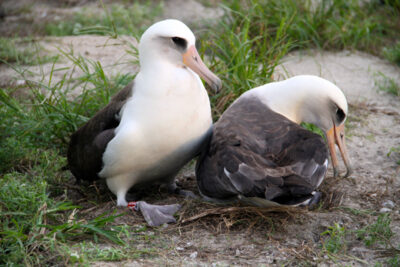 Have a birthday looming? Perhaps you just celebrated one and started feeling a little out of it? Not to make comparisons, but the world’s oldest known bird just turned 70 (well, at least 70)….and she has laid an egg and is about to become a mom yet again. To us, albatross are extreme – they spend a couple of years (yes, years) at sea between egg-laying, landing only to nest and raise a chick – although a lot of that time is spent flying over open water for days on end, finding food for the chick. And albatross chicks are needier than songbird or shorebird chicks, so the kids need more training. Hence the 2-year egg-laying rule. It’s thought that Wisdom has most likely flown millions of miles in her lifetime, and while she is monogamous, she has outlived several mates. And during her life has likely reared at least 30 chicks. So next time you are feeling old, be wise and think of Wisdom. You can read more about her and her most extraordinary life here in this article from Audubon.