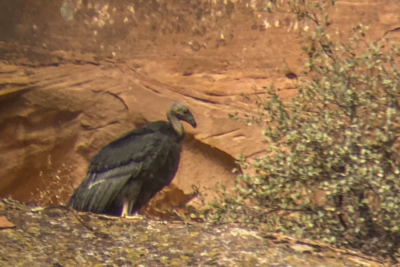 California Condor chick #1111 could be called an over-achiever. The offspring of the same birds who had the 1000th Condor chick, this 4.5-month-old young bird took flight about 6 weeks before most of his cousins will. His parents in Zion National Park have been together 4 years, and #1111 is their 4th chick. They will care for him for over a year, and won’t have any more chicks until he has become independent.
California Condors are critically endangered – most of the decline has been due to lead poisoning from hunting shot in the dead animals they are eating. Their numbers have increased from a low of 22 birds in the 1980’s to roughly 500, but many of them are still in captive-bred situations as there are few lead-free safe areas for them to be released. Lead shot poisoning is still a persistent issue, as are illegal egg collecting, powerlines, and habitat loss.
Learn more about these endangered birds who are our largest members of a much-needed clean-up crew from the National Park Service.
California Condor fledge image courtesy of National Park Service