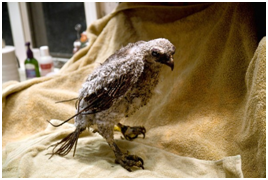 The Chicago Tribune wrote this story about a hawk who had gone to her roost for the night, expecting to have a cool but quiet nights rest. Sadly for her, she was sleeping in a tree that happened to be near the location where a small plane crashed, killing both passengers. Upon impact, the plane exploded in flames, and the hawk was blasted from her roost to the ground – the blast burning off all her feathers. Most news reports would have reported the fatal crash and left it at that tragedy. But in this case, one of the police officers on the scene saw a bird standing in the snow not far from the wreckage and had the compassion and presence of mind in the turmoil to call someone to rescue the hawk which had been badly burned but was still alive. It’s a good reminder that sometimes the end of the story isn’t really the end. Bravo to the police officer who found the bird and thought to call for help for her, rather than to just leave her in the snow. And thanks to Dawn Keller of the Flint Creek

Wildlife Rehabilitation Center for taking her in and caring for her. As a result, the crash which was a terrible tragedy was not a complete one, and this innocent bystander – nicknamed “Phoenix” – now has a chance at survival.