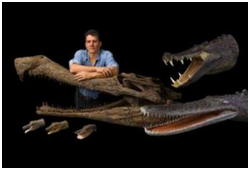 Ok, so maybe 100 million years ago, the Sahara Desert was a little more wet than it is now, and so we shouldn’t be too surprised to see that there were giant crocodiles that lived there when it was known as Gondwana. Nowadays we get excited when we see a crocodile that is over 20 feet long, but according to National Geographic Explorer-in-Residence Paul Sereno, based on the skeletons he found, these crocodiles were monsters and strange ones at that. The SuperCroc was 40 feet long and weighed 8 tons. Big, but not strange like some of the others which were smaller but appeared to have unusual characteristics for a modern crocodile like eating grubs or walking upright. (So much for bipedality as a trait that separates humans from other animals.) Sereno believes the amphibious abilities of these crocs who could gallop on land and then were equally at home in the water was the basis of their success. The entire article can be found in Science Daily.