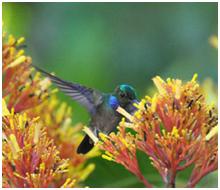 No matter what the season is, there is something special about the southwest peninsula of Costa Rica near Corcovado National Park. It’s a wonderful forested area by the water that has a rich diversity of bird and animal life. Lapa Rios (meaning River of Macaws), founded by American Karen Lewis before the term “green” meant much more than a color, is still a favorite place for my husband and me. An eco-lodge which bears Karen’s careful touches, Lapa Rios is a luxurious experience in a pretty amazing location. We were there last December and again in May this year and the difference in seasons is striking. In May, with most of the migratory birds gone and many local birds nesting, things are a lot quieter in the morning! But that’s not to say that there isn’t much happening. Every morning at dawn, regardless of season, scarlet macaws trail across the sky in pairs, screeching to each other- some at eye level from the cliffside bungalows – to go to their foraging grounds. Flowering trees abound and there is no lack of humming birds like this Beryl-crested hummingbird who defended flowers in his territory fiercely from other hummingbirds, butterflies and insects. 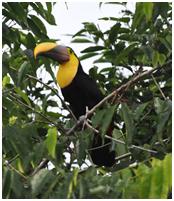 The sounds of Chestnut mandibled toucans and Red-lored parrots abound, and on the most recent trips I made it a point of capturing some of these great sounds and making them available as ringtones – like these Red-lored parrots or this great sound of frogs at night. Now every time my phone rings, I am reminded of how beautiful the rainforest in Costa Rica is and anyone near me can hear a little of the jungle…even here in New York City.