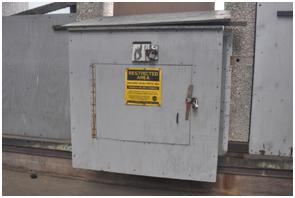 Climbing the Verrazano Bridge and dodging the attacks of Peregrine falcons while trying to band their chicks is all in a days’ work for Chris Nadareski who works for the DEP — and one of whose many jobs is keeping a sharp eye on the Peregrine population in NYC. Led by Chris, Barbara Loucks and Barbara Saunders of the DEC and our friends at The Peregrine Fund, I had the privilege of visiting one of the 15 Peregrine falcon nests in New York City. We made our way past the ventilation equipment on the 50 something floor of 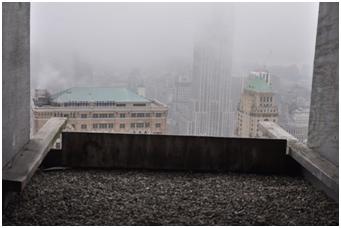 the Met Life Building to check on the status of the nest box.

After opening the back door to the nest box just a crack to make sure the coast was clear, Chris opened the door fully and we could see the arresting view from this midtown aerie with its empty nest. This is a sad occasion as it is believed that something has happened to the female Peregrine as the male as been seen flying alone the past several days. Not that he might not find another mate and they could have a clutch later in the season. Chris told me that in fact sometimes they have a clutch of Peregrine chicks in late June when this happens. But right now is the general time to be seeing Peregrine chicks hatching and so Chris, Barbara and Barbara have been going nest to nest the past week, banding the new chicks and just making sure things are going as planned. Given the success of the NYC Peregrines to date, including 4 chicks at 55 Water Street, the Met Life Building nest was a disappointment. 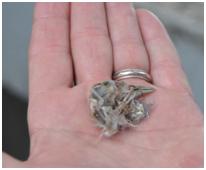 While the view was stunning, equally as arresting was the debris in the nest box. Feathers from Cedar waxwings and red-shafted Flickers competed for space with the odd tiny bird skull.

Alas, it appears this male Peregrine has lost his mate this year. And while there is a possibility that if the male could find another mate this season and they might still have a clutch of eggs, for now, there was no scrape and no evidence of any nesting behavior in the Met Life nest box. Maybe next year there will be a pair of Peregrines and they will be as successful as this nest box with 3 chicks in Boise brought to you by The Peregrine Fund. Until then, on Park and 42nd Street, we will just have to watch the lone Peregrine fly in and out of his amazing aerie.