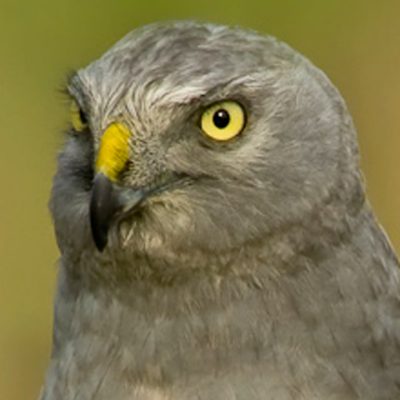 Northern Harriers are like a cross between a hawk and an owl; they normally hunt during the day, but have the round facial disc of an owl. This not only gives them the appearance of an owl, but also enables them to hunt by sound! This has given them their unique hunting style. Northern Harriers are often seen gliding low over a grassy field. All of the sudden you’ll see one drop down when it hears a prey item, such as a mouse, rustling in the grass. Harriers are also seen “stooping”, or diving straight down at prey like a falcon or buteo, or chasing down prey like an accipiter. Harriers really can do it all!  Keep an eye out for a low-flying hawk with a flat, round face. They also have a white rump patch and a deep “V” shape to their wings when gliding. Adult males are pale gray, earning them the additional nickname of “gray ghost”.