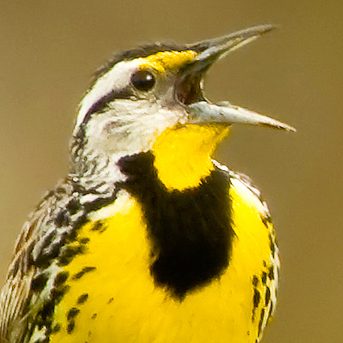 With their bright yellow breasts and beautiful “V” necklace, it’s hard to believe meadowlarks are members of the blackbird family. There are two species of meadowlarks – eastern and western – and they are very difficult to tell apart. That is, until they sing. Both have beautiful songs, but very different. The Western Meadowlark has a beautiful complex fluty song; and his Eastern counterpart….a lovely song but a little simpler. Meadowlarks are grassland birds, and Western Meadowlarks can be found in mixed flocks feeding on the ground in the mid-west and western US; Eastern Meadowlarks in the mid-west and eastern US and into Mexico and northern South America. Their territories only occasionally are shared and they rarely hybridize. Both nest in Canada and in the northern US – on their respective sides of the continent! Males in both species of meadowlark have two mates.