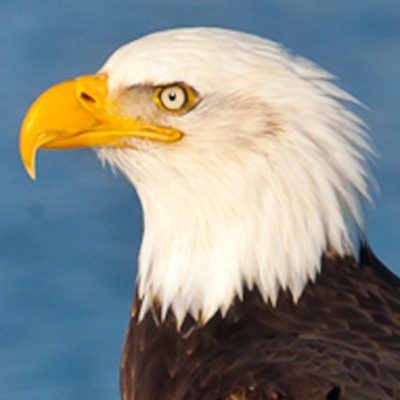 The Bald Eagle was dubbed America’s national bird in 1782, much to the chagrin of Benjamin Franklin who suggested the Wild Turkey as the symbol of freedom and justice. Adults are distinguished by their full white heads and tails, but young birds are overall brown with some white mottling. Bald Eagles can live up to 28 years in the wild and will mate for life. They prefer areas around large bodies of water that are not overly developed as they can be sensitive to human activities. Eagles mainly feed on fish, but are not opposed to small mammals, birds and reptiles. They are also thieves! Bald Eagles are known to harass other birds of prey until they drop their catch and take it for themselves. Their calls are surprisingly small for such a large bird.